Brad Jenks is poised to be one of the great teachers of his generation.

Brad Jenks is poised to be one of the great teachers of his generation. 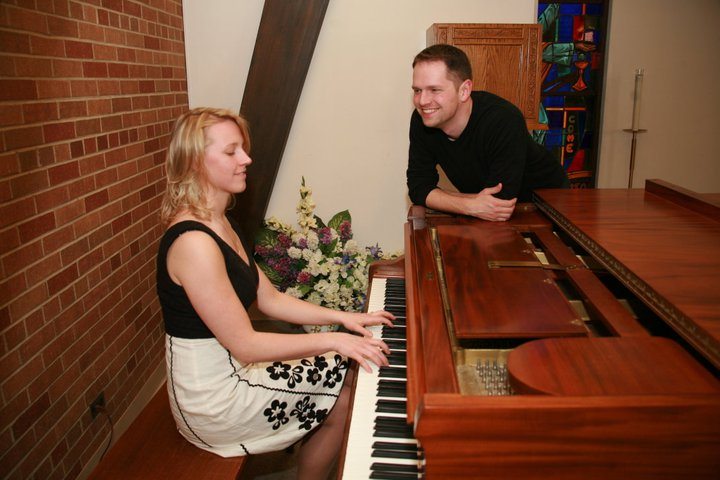 is Chicago-based Voice Teacher Brad Jenks and Collaborative Pianist & Vocal Coach Sarah Jenks. Both of us are passionate about working with singers to help them sing better, more capably, and joyfully make music. Our experience working with vocalists spans from experienced professionals and Young Artists to the avocational and the beginner. Our focus is to help singers in strategies for heathy vocal practice and development.

Work With Brad And Sarah »

What Are Colleagues and Students Saying?

Brad Jenks has a terrific ear for healthy singing. He's been like this for as long as I can remember. This seems to be his gift. But as his knowledge of singing has grown he has also developed the ability to share that gift with others so it doesn't surprise me that he's made the teaching of singing his vocation. I've known Brad for 27 years. I've traveled with him throughout the US and Europe. I've known him as he's worked in a variety of places doing a variety of things and it makes me happy to know that he's now out there in the world teaching young singers what I was taught: that we are all given a vocal gift and it's our job to take care of it the best we can.

I met Brad in the summer of 2004 while working as a principal artist at Glimmerglass Opera and was instantly struck by his enthusiastic love of music and sincere desire to help others realize their potential as singers and as human beings. He has a good heart, a creative mind and an instinctive ear, and he will no doubt employ all of them fully in his teaching.

...You will not find a more thoughtful, sincere, and dedicated person than Brad. As a teacher, you can be assured of these qualities combined with a deep respect for the arts and all they encompass. He admires the human voice and has a great deal of enthusiasm for a healthy sound. You can trust that he will do his very best to make you a better, and most importantly, a happier performer.

The Hell of Poor Breathing

It seems there is an appetite right now for shows like Lucifer and The Good Place, which spend many hours of plot reimagining old takes on the Salvation and Damnation theme. I, like many others, have lately found myself enjoying them, especially with their thought-provoking and entertaining takes on the matter; perhaps most especially the idea of Hell as cycles of torture usually being of one’s own design.

Musing on this recently, I was reflecting on the old notion of many evangelical Christians with regard to ministering with the aim to “save people from Hell.” And I thought to myself, “Why all this “saving from”? I mean, why not sell people on Heaven? How’s that not an easy sell compared to Hell? That’d be like selling people on.... breathing.” And, of course, it suddenly struck a parallel in my mind with singing and teaching.

When teaching singing, a person can be all locked up, tense, restricted, and uncomfortable. And this is always either entirely, or in large measure, a breathing issue. You can advise them to breathe until you’re blue in the face (pun intended). Give them exercises, images, meditations, mental tricks, etc.– but if they simply prefer the familiar, no matter how uncomfortable or inhibiting, because they are fundamentally afraid of the vulnerable freedom that comes from real, flexible breathing, they will effectively be choosing a kind of Hell in their singing, as it becomes physically inhibiting, musicianship-curbing, and potentially spirit-crushing.

People are so prone to get doctrinally legalistic about what earns one Heaven/Hell, and teachers and pedagogues similarly love to attempt distinctions and justifications ad infinitum with regard to function and style. But in truth there are really only two rules: In and Out. Two Great commandments. Guidelines so simple we routinely fail to achieve them. And this is why everyone can easily rattle off “Love your neighbor” as though it’s the motto of a simpleton, and yet prisons are full. And great singers and revered teachers are often found to utter such frustratingly simple things as, “You’ve got to learn to breathe”, and every struggling singer winces, and thinks, “GAH! I know how to breathe!”

Two great commandments...And just like the devil creeping at your gate, it is especially when you start to make concessions, ie. rationing breath, tensing your abdomen for a little extra strength, tensing cords and abdomen for belting, holding breath to affect vibrato..... these undermine the In & Out and lead to little imbalances building up in the system that can gradually take firmer root and, over time, seriously undermine one’s vocal freedom.

And it seems to me that the things required to breathe well for singing are the same that are asked by one’s religious tradition. In order to breathe well you have to 1) release, which takes trust and faith and hope, and 2) you have to work flexibly on a stream of air, which takes trust and faith and hope and discipline and spirit. And the whole thing is best done under a broader umbrella of Gratitude, from which we make our best music. But failing to breathe, being bound up - and never stepping outside the familiar to learn to correct this - is caused by fear, distrust, pride, and selfishness, and lack of generosity. As mentioned above, one of the most interesting elements of these new shows is actually an old idea, tidily summed up by the wonderful C.S. Lewis: “The gates of Hell are locked from the inside.” (The Problem of Pain). It is a striking similarity that, in an effort to get control over our singing, itself fundamentally an exhalation activity, we so often fail to let ourselves truly breathe.

And fear isn’t the only enemy of good breathing. In pondering this I was reminded of how often I remark that I find that most people have the respiratory equivalent of poor posture. Now, this isn’t to say that most people are just doomed to bad breathing, that only the select few will ever breathe well; like some sort of Respiratory Calvinism. Most people do in fact get along breathing with no real trouble in their daily life, in much the same manner as most folks aren’t out cheating or killing their neighbors (despite what Chicago traffic might bring out of us.) But we’re so often prone to the path of least resistance, whereas good mechanical relationships require very active, and purposeful processes to remain healthy and efficient.

And as I sat thinking about all of this, I was reminded of one of my teacher’s favorite quotes-
"For God did not give us a spirit of timidity, but a spirit of power, of love and of self-discipline." -2nd Timothy 1:7

Log in below to view your Student Portal.
Navigation